Settling down. A phrase most commonly preceded by “find a nice girl and…”

Not that there haven’t been more than a few nice girls to be found on this trip, but I still don’t reckon I’m there yet.

Well the Conquest has “settled down” for a least the foreseeable future. I’ve taken a gorgeous apartment at Lanta Gym to “settle down,” do some serious writing, get in shape while learning some Muay Thai, and do a little detoxing after the thousand or so cheap beers I’ve consumed since entering SE Asia. 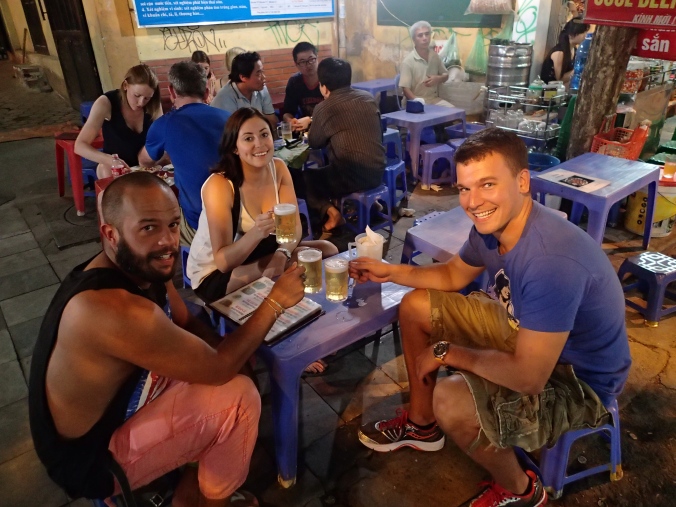 I was ready for a place to call my own for a while, to completely unpack my bag, leave all of my things laying around without the concern that someone might make off with one. 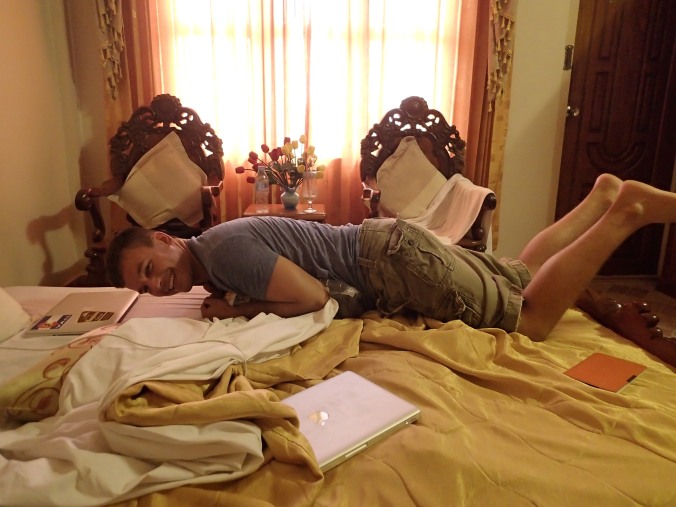 I was ready to be in 1 bed for more than 3 consecutive nights, to slow the pace which has put me in 53 beds in the past 100 nights.

I’ll risk a little moss growth. This stone is tired of rolling at the moment.

But boy oh boy, what a detox it will be.

I got dropped off after a 3 hour van ride from Krabi, which included 2 ferry rides to finally get to Koh Lanta, a largely undeveloped island in the Andaman Sea. I accidentally left my flip-flops in Bangkok, so I’d been barefooting it exclusively for 3 days.

I’m sure there are a fair few people who would’ve paid good money to see Chris Moorman, former buttoned up, Young Republican Wall Streeter, standing on the side of a Thai island road barefoot wearing a Buddha ring, singlet/tanktop, “hippy pants,” and ankle bracelet. All of my worldly possessions strapped to my back like some “goddamned dope smoking hippy.”

Life is a strange thing. Some days tuxedos, some shoeless weeks. 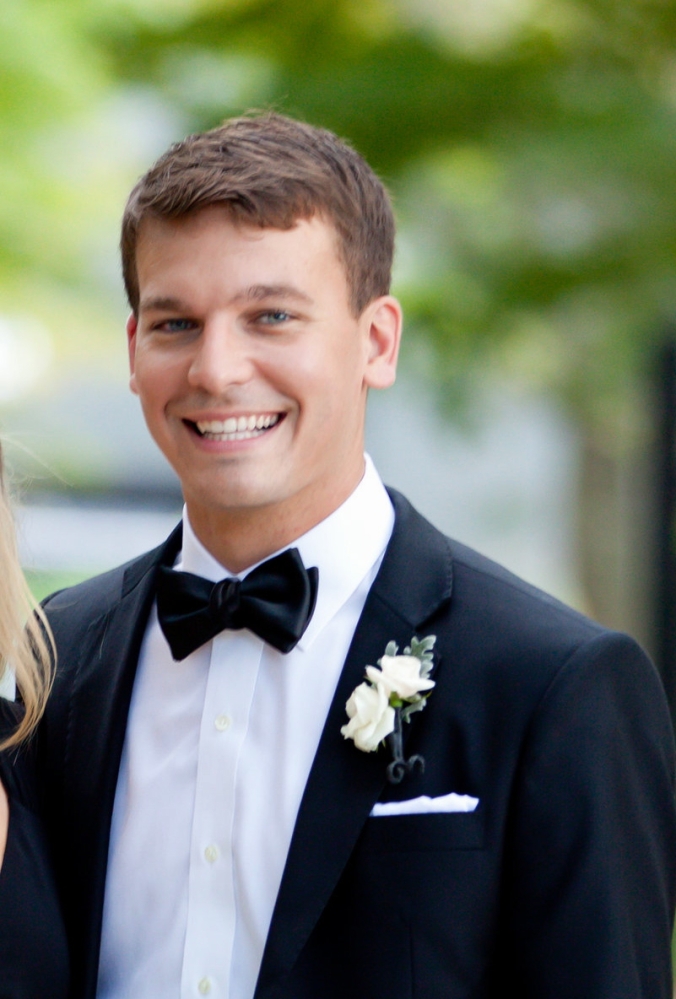 I stepped into a roadside stand, where I grabbed a sandwich and some free WiFi to get my bearings. I walked down the gravel road to Lanta Gym, where I met the crew and signed up.

They showed me the gym, the luxurious accommodations and the pool. I looked at them and said, “Sign me up.” 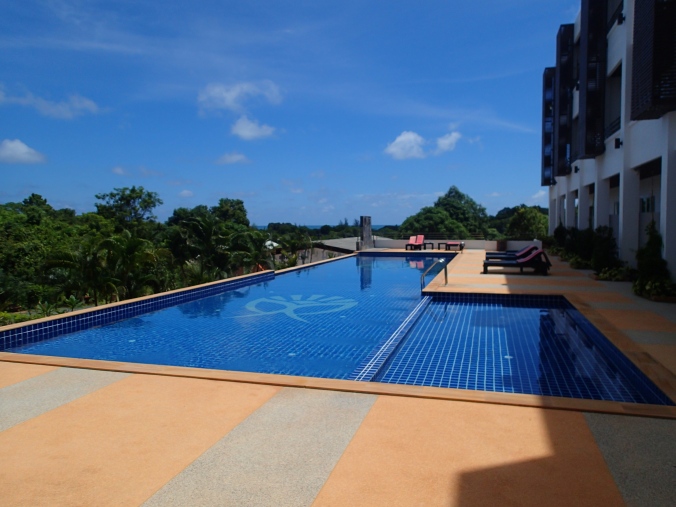 For 3 weeks of private Muay Thai training, an all marble 1 BR apartment (cable, AC, dual shower heads, all cleaned daily) 3 steps from an Olympic swimming pool, daily made to order breakfast, motorbike rental, and access to their full Western style gym with steam room and unlimited yoga classes I was charged the grand total of…

By comparison, for a flex 1 BR (one bedroom split in half by a fake wall) in Manhattan, I was paying $1575 a month. That didn’t even include utilities, which ran another $150 a month.

Good to be in Thailand for low season.

I got my bearings, found the nearest 7/11 (of which there are approximately 1 for every 4 human being in Thailand) and put on my preposterous looking Muay Thai shorts. I walked the 30 yards down to the open air gym, with a few stray dogs and cats following behind me like I was the Pied Piper. 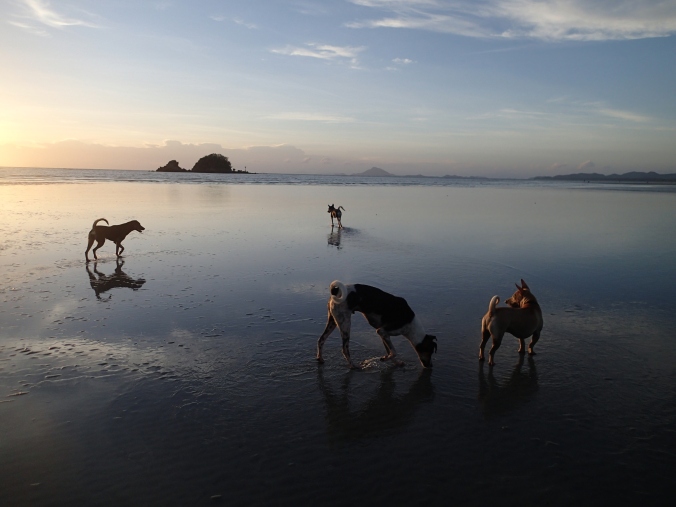 Then the sweating started.

My instructor, Anglicized name Zac, was great. He put me in the ring with Ko, one of the other instructors for an “IQ test.”

I probably have 35 lbs and 3 inches of arm reach on Ko, but I’ll be damned if I landed more than 3 punches in the 3 minutes that he danced around and laughed at me. He caught me with a couple sharp jabs to the jaw, laughing merrily as he did.

He yells something in Thai as everyone laughs, then puts both gloves over his ears.

At this point, I thought I saw my opening to finally get him with one in the guts.

Zac finally ended the mild humiliation, putting his arm around my shoulders and saying “One WEE, we’ll make you good. And you hab twee WEE.”

He then proceeded to work me like a borrowed mule for the next 75 minutes. He patted the finely marbled American flesh that I hold around my midsection and laughed.

“You hab vewy nice one pack. Vewy nice. No wowwy. We make 6 pack in no time.”

I will chalk that up to good news.

I got through it and walked across the road to catch one of the fabled Thai island sunsets. I was far from disappointed. 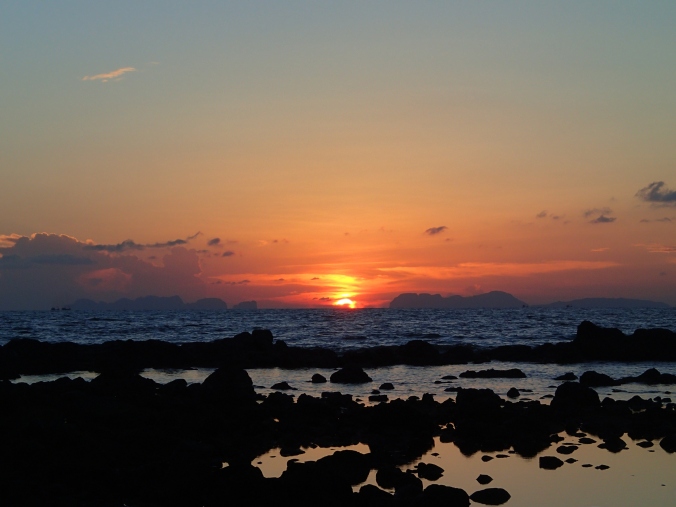 I jumped on the motorbike to find a roadside stand for some food. Found one where I got a huge pile of sticky rice, a couple chicken breasts, and a few skewers of some very chewy “beef” for $1.50.

I’m going to keep telling myself it is really beef. Not exactly the ribeye a la Johnny Zarse that I’ve become accustomed to, but yeah, “beef.”

I came home and checked out Thai cable, where I found a station with a very mournful music video going on. There were English subtitles, so as I chewed through my “beef” I continued to watch. The whole thing was basically a promotional video from the National Committee for Peace and Order (NCPO), which is the proper name of the military coup which is ongoing in Thailand.

The videography was completely professional, mostly scenes of positive interactions between uniformed soldiers and civilians and the subtitles in English read things like “Trust in us, we will restore your country. For the people. Order and peace will come. It will take some time, but the Army is on your side.”

I’ve been trying to read as much as I can in the English language press here, mostly picking up newspapers like the Bangkok Post and The Nation. I can’t really tell the level of censorship going on, but the people I’ve spoken to are generally in favor of the coup from what I can tell.

Military coups are largely a way of life here in Thailand. Since the abolition of absolute monarchy in 1932, there has been a military man in power for 54 of the subsequent 82 years.

This is the 12th coup the 62 year reign of King Bhumibol Aduljadej.

It is a concept that an American could no more wrap his head around than the possibility of a talking dog.

Other than the military presence in the big cities that I’ve encountered, I can’t really tell that anything is going on. Even that “military presence” seems to be nothing compared to some days when I’ve walked down North End Avenue or into Penn or Grand Central Station in NYC and seen 50 police cars or 35 National Guardsmen with M-16s patrolling the area. (My negative thoughts on the militarization of the American police force could fill volumes.)

It is pretty funny to see music video propaganda though, and I’m very glad that they were kind enough to put English subtitles up for me. Really made me feel like part of the team.

Well I’d love to write more, but I’ve got to find some bananas to recharge before my 4PM session.